The television landscape has changed dramatically over the past few years. Neil Landau, author of TV WRITING ON DEMAND explores how the way we watch it has changed too. What TV viewing options are available to us?

Great storytelling on television hasn’t changed all that much in 50+ years. We still need someone to root for and invest in. But the radical shift in the TV ecosystem—from traditional broadcast and cable network brands to digital streaming giants (Netflix, Amazon, Hulu)—has led to an ever-expanding array of the most authentic TV shows we’ve ever seen. The legacy networks have skin in the game, too, with all-access, on-demand options. Those willing to pay the monthly subscription fees can get everything—450+ shows—commercial-free. It’s game on, with fierce competition between all players to produce the boldest and freshest content and win subscribers. What’s more, there’s no longer a distinction between broadcast, cable and streaming. Now it’s all just called content.

As a society, our relationship to time—arguably the most valuable commodity—has changed, significantly impacting viewership. We manage and attempt to maximize our time by adopting more and more efficient technologies, which have enabled us to multitask and squeeze more than 24 hours of work/consumption/play into each day.

How? Our gadgets deliver what we want and when we need it: email, texts, calendars and our favorite TV series, available to us 24/7, at our fingertips. We’re shaving off commercials, skipping intros, earning from web ad bucks instead of commuting, all meaning we cram more than a day of 20th-century living into each 21st-century day.

As TV continues to evolve, there is no going back, only forward faster. With TV content so accessible, it’s easy to get addicted and hard to pull ourselves away from what’s up next. You don’t even need to move a muscle for the next episode to play automatically; we’re now in a culture where we consume more by doing less. Netflix’s breakout hit, Stranger Things, offered up the best thrill ride in town—and we didn’t even have to leave the house. 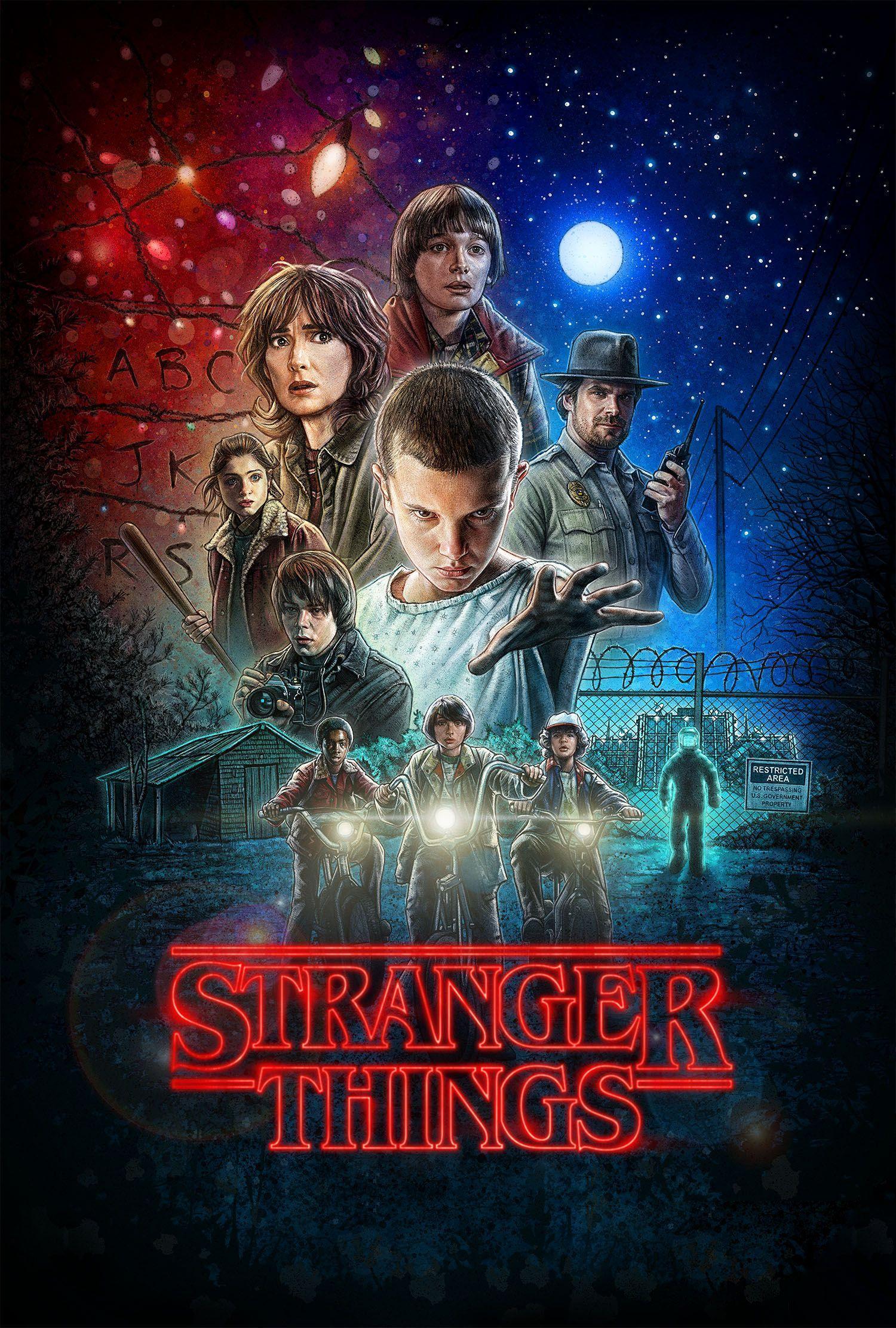 Are we in a bloated content bubble that’s inevitably going to burst? I can foresee some attrition, but more choices are always preferable to today’s channel and app surfers—that’s you and me. What is happening is that the TV ecosystem is continuing to, just like the real-world ecosystem, evolve. Disney is to end its theatrical distribution deal with Netflix in 2019, with Bob Iger announcing that Disney- and ESPN-branded streaming services are to launch that same year, with access to Pixar, Marvel and Star Wars content. More studios may follow suit, retaining exclusive rights for their own, new streaming services. The streaming giants will begin relying more on original content. But of course, they’d already foreseen that.

Showrunner/ writer/creator Shonda Rhimes and her producing partner Betsy Beers signed a multi-year deal at Netflix, ending their long relationship with ABC (which is owned by Disney). These are the echoes of the HBO story in the 1980s when studios pushed back against its rapid growth and success. HBO made new deals and flourished. In fact, in 2017, Netflix made the first acquisition of its 20-year history, of comic book publisher Millarworld (which created Kingsman and Kick-Ass). Again, it’s reminiscent of Disney’s 2009 acquisition of Marvel. In 2017, Disney bought longtime rival 20th Century Fox’s TV and movie studios, and gained majority control of Hulu. “Content is the weapon of choice in this over-the-top game,” says Peter Csathy, chairman of CREATV Media. Others are rethinking their strategy internally, such as CBS’ Les Moonves, who surprised many with his announcement that The Twilight Zone reboot will stream exclusively on the digital CBS All Access platform. This follows All Access’streaming of NFL games and Star Trek: Discovery—whose premiere and second episode resulted in the biggest ever increase in platform subscribers. Streaming “is a more profitable business model” Moonves declares.ii

What may be truly game-changing—as FX Networks chief and industry savant John Landgraf puts it—is the “titanic struggle” on the cards between Netflix, Amazon, Facebook and Apple. The latter Silicon Valley giants are moving into the scripted TV space, with Facebook’s launch of its “Watch” premium video platform; Apple’s high-profile hires of Sony TV, Channel 4 and Amazon execs to oversee its scripted content; even Snapchat has partnered with NBC Universal to produce programming. The joint venture signed its first deal with Mark and Jay Duplass, whose first series for the app is set to debut in 2018.

In contrast, “Watch” will be a platform for anyone who adheres to Facebook’s community guidelines to upload their shows. Facebook is also developing a drama with Kerry Washington plus an English language version of the Scandinavian hit teen show Scam. Then there’s YouTube TV, which is entering the living room via its new app that integrates with smart TVs and connected devices, including Apple TV, Roku and Xbox. YouTube Red Originals, encompassing web series to feature-length movies, are already growing in scope and reach. Landgraf compares the sheer financial weight of the digital behemoths to a tsunami or a water cannon, “like being shot in the face with money every day” he says. “Wait for the epic titanic fight for talent . . .  Beyond television, we’re all watching an epic battle unfold for who will control human attention. For who controls attention, controls its monetizing.”iii We may see new business models emerge, even before the end of the decade. Certainly, there will be winners and losers.

On-demand viewership provides us with the illusion that we’re in control, if not of the existential Big Picture then of the little ones via our flat screens, laptops, tablets, smart phones. Indeed we, and our devices, are locked in a symbiotic, co-dependent relationship, especially when we get hooked on a great new series. Jill Soloway summed it up best at the Variety TV Summit in June 2017, when she mused that when we stay up all night watching a show, it’s like meeting someone special and wanting to stay up all night talking. It’s like falling in love.

It all comes back to story. Given the political landscape, the need for niche representation on TV is ever more urgent. “History doesn’t repeat itself, but it does rhyme” goes the saying. It’s the stories we tell that can transform a generation. In my last book, TV Outside the Box, I posited that “Niche Is the New Mainstream” which positively reflects how diverse we truly are and which arose from our need—a demand—for inclusivity. Politically, the idea of going back and reconnecting to“the good old days” appeals to some, while it excludes and outrages others. These are divisive, incendiary times, and the huge volume of content today simultaneously enthralls and pacifies us.

For many, Stranger Things was the right show at the right time. We needed a dose of innocence and nostalgia to combat all the cynicism and “fake news.”We continue to need pure escapism. We need those heroes. “I want to thank the great algorithm that put us all here” Donald Glover declared in his Emmy acceptance speech in 2017, as he made history. He was joking, but it’s true: Despite digital’s threats to the more traditional TV industry, it can bring us closer together. His show Atlanta is on FX—Landgraf’s network. Their game is far from over, and so is our political struggle. Today more than ever, we need to tell the stories that connect us and bring us closer together. This book presents how. And after all, as Charlie Brooker said as he accepted his second Emmy for the technological thriller Black Mirror, “Love will win.”

Neil Landau is a bestselling author, producer and award-winning screenwriter who runs the Writing for Television program in the UCLA Department of Film, Television and Digital Media (his alma mater.) His credits include *Don’t Tell Mom the Babysitter’s Dead, Doogie Howser, M.D., MTV’s Undressed and the Tad animated franchise, which earned him a Spanish Academy "Goya" Award. He has written pilots for ABC, CBS, Disney, Freeform, Fremantle, Lifetime and Warner Bros, and served as Executive Script Consultant for Columbia Pictures and Sony Pictures Television. Neil penned the bestselling 101 Things I Learned in Film School, The Screenwriter’s Roadmap, The TV Showrunner’s Roadmap, TV Writing On Demand: Creating Great Content in the Digital Era and TV Outside the Box: Trailblazing in the Digital Television Revolution, which was the first book sponsored by the National Association of Television Program Executives (NATPE.)

Browse our Videos for Sale

Neil Landau is a bestselling author, producer and award-winning screenwriter who runs the Writing for Television program in the UCLA Department of Film, Television and Digital Media (his alma mater.) His credits include *Don’t Tell Mom the Babysitter’s Dead, Doogie Howser, M.D., MTV’s Undressed and the Tad animated franchise, which earned him a Spanish Academy "Goya" Award. He has written pilots for ABC, CBS, Disney, Freeform, Fremantle, Lifetime and Warner Bros, and served as Executive Script Consultant for Columbia Pictures and Sony Pictures Television. Neil penned the bestselling 101 Things I Learned in Film School, The Screenwriter’s Roadmap, The TV Showrunner’s Roadmap, TV Writing On Demand: Creating Great Content in the Digital Era and TV Outside the Box: Trailblazing in the Digital Television Revolution, which was the first book sponsored by the National Association of Television Program Executives (NATPE.)

More from this Author

Copyright © 1994-2019 Creative Screenwriting Limited. Company Number 9727180
Log in - Powered by WordPress - Designed by Gabfire Themes   Do NOT follow this link or you will be banned from the site!